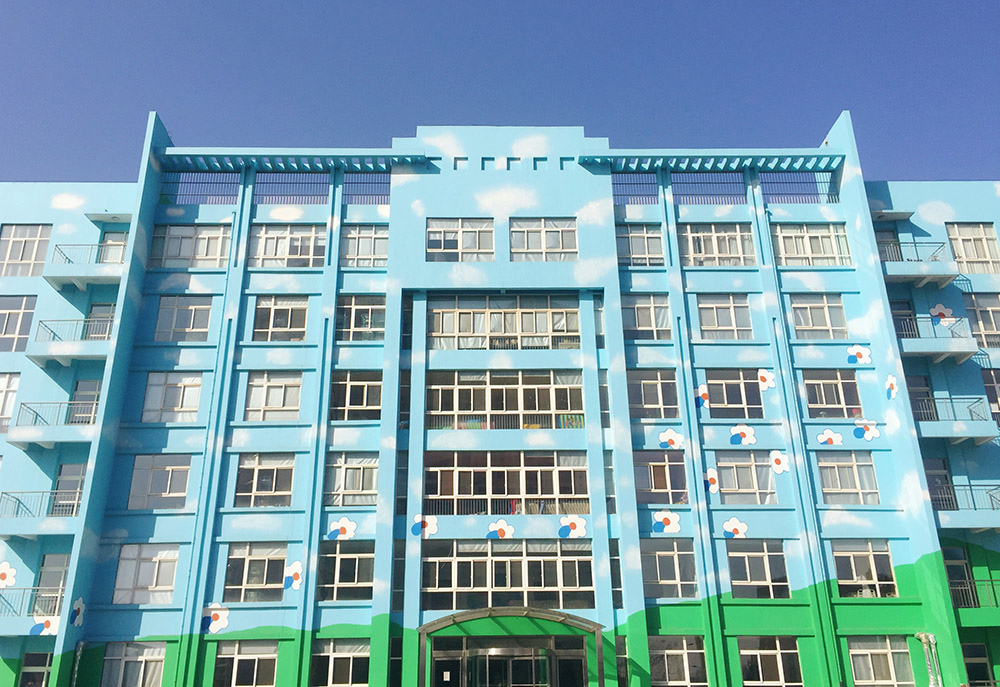 Have you ever pictured God as whimsical? I hadn’t until about eight years ago.

I’ve often pictured God as loving, gentle, strong, and jealous—you know, the characteristics many of us grew up reading about. Those characteristics would allow my imagination to conjure up a picture of God in my mind. Whether that was an image of a gentle-eyed Nazarene carefully holding a small child, or a mighty Titan with scepter in hand holding back the red sea; I could pick a mental image of God that would fit the words that most church-goers would understand.

What I never pictured until eight years ago was a nearly Mr. Rogers-type older man, gentle as all get-out, sitting on the edge of his seat, holding back excitement and dying to blurt something out.

That’s the picture I had of God in my mind the day I first laid eyes on Maria’s Big House of Hope.

That the God of the universe would be in the whimsical and wild details of how a building came to be painted leaves me giggling and grinning to this day, and I thought you might just want to know the story.

About 11 years ago, Steven and I began talking with our good friends and operating partners in China, Robin and Joyce Hill, about a burden that we felt for taking care of orphans in China. We wanted to give back to the country that gave us our daughters. Robin was excited about the opportunity to work with us, and he had just been offered land by the Chinese government to potentially build a facility in the Henan province. It seemed like God’s timing was perfect.

After all the plans came together, we began the process of building a six floor facility in Luoyang, China. But in May 2008, everything came to a stop here in the United States as our sweet daughter Maria went to be with Jesus. Life stopped as we knew it.

As we began the painful process of moving forward, a fund was set up at Show Hope to honor Maria’s life, and people began to give to what is now known as Maria’s Miracle Fund. Those gifts were vital in the construction of Maria’s Big House of Hope, and continue to impact the lives of kids as people give in her honor.

How honored the Chapman family was when this building was dedicated in the Summer of 2009!

But that all leads up to my story of a whimsical God. As you can see in that picture at the top of this post, Maria’s is a big, blue building with clouds painted all over it. And now I’m going to let you in on a secret… that wasn’t supposed to happen.

We took a trip to China to check on the building’s progress, and boy we were surprised. When we flew to Luoyang from Beijing, we were greeted by the building you see at the top. A huge, brightly colored building covered with clouds.

“You see, because to build the building, we had to work in conjunction with the Chinese government.” Robin explained to me.

He laughed and said, “The name of the government organization we worked with to build Maria’s was called Blue Sky, and their logo is a square of blue with white clouds. I thought it would be nice to paint the very top part of Maria’s, the kind of square space that sticks up into the sky, that same blue with the white clouds. Kind of a way to say ‘thanks’ to the Chinese government for allowing us to build the building.”

I kept looking at Robin waiting for more. Then he said through his very British/Australian accent, “It got lost in translation, and instead of one square of space getting painted that way, the entire building did!”

That’s international work for you. Lost in translation. An entire six story building, painted bright sky blue with white clouds all over the exterior! When you drive up to the entrance, it literally looks like you are driving up to a Disney—Toy Story attraction. Every building, and by every building I mean every building, is brown or gray in Luoyang. But not Maria’s. It’s hard to really say just how much it stands out. Robin has said that on a clear day, you can see it from the sky when you are landing in Luoyang. What a statement. In fact, the tire store down the street mysteriously turned up painted the same exact way a little bit later. We heard they just wanted to follow suit in our trendsetting!

I would love to say this was a big mistake that worked out for the best. Everybody has loved the way it is painted. We couldn’t have thought of that idea if we had to. A big, beautiful attention-getter! It wasn’t our idea, but guess what—it wasn’t a mistake. Remember at the beginning when I had asked about the whimsical God that I could picture as a Mr. Rogers, dressed oh-so casual but cool, sitting on the edge of his giant recliner, just waiting for the big surprise to be revealed? I totally believe Steven and I got the best surprise ever. God knew!

God, in his infinite and whimsical wisdom, knew that Maria’s Big House of Hope needed to be bright blue with white clouds, and that we would love it. In fact, I can just picture Maria sitting on God’s lap and whispering, “Yeah, that’s a great idea! Let’s do it!”

Because of this, and because of the amazing care given to children who come to this building, Maria’s has picked up quite a reputation in Luoyang. As one true story goes, a traveler mentioned to a local resident that they were in Luoyang to work at the big blue building with clouds.

The local person responded and said, “I know that building. It’s the house where God lives.”