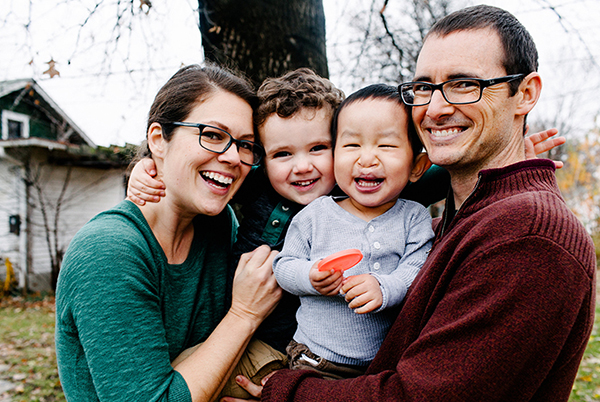 When we began, we were quickly overwhelmed by two things: 1) All the questions regarding what type of adoption we would pursue, and 2) All the money we would need to raise.

We had to decide whether to adopt domestically or internationally. If international, then what country? Boy or girl? Which program – special needs or the traditional track? Initially, the special needs track seemed daunting, but we also discussed the fact that choosing to adopt was not about getting the best possible version or the best deal.

Adoption is about love.

So again we prayed for God’s guidance and decided to adopt a child with special needs.

We got to see a list of waiting children who had special needs in China. Through God’s guidance we we were matched with a nearly 2-year-old boy who had a cleft lip and palate along with a couple other minor issues. We decided early on to call him Samuel.

As for the financial barrier, we knew we didn’t have the money to adopt internationally, but we also knew that God is a great provider. Lindsey is an artsy gal, and she did a great job using her talents and connections to fundraise.

We were also blessed through very generous grants, including one from Show Hope. We are so thankful for organizations like Show Hope!

We were amazed at the generosity of friends, family, and even strangers who helped us on our adoption journey!

Eventually, we found ourselves on a plane for China. It was a challenge and an adventure. On October 25, 2015, we finally met Samuel for the first time. The idea of receiving a nearly 3-year-old boy who does not understand (much less speak) your language, living out of a hotel room, and trying to figure out how to feed, bathe, comfort, play, and bond with him is a bit overwhelming. Then there’s the need to travel all over two huge cities with a toddler while you work to finalize even more documents, visas, and certificates. This was no vacation, but it was monumental as we finished a long and arduous journey (adoption) and began a new journey (life with a new son).

Since we’ve been home, it is clear that Samuel will be a delight and a challenge, just like his brother. Raising children, biological or adopted, is not easy.

But it is good.

The journey continues, but we journey with God and trust in his loving guidance.