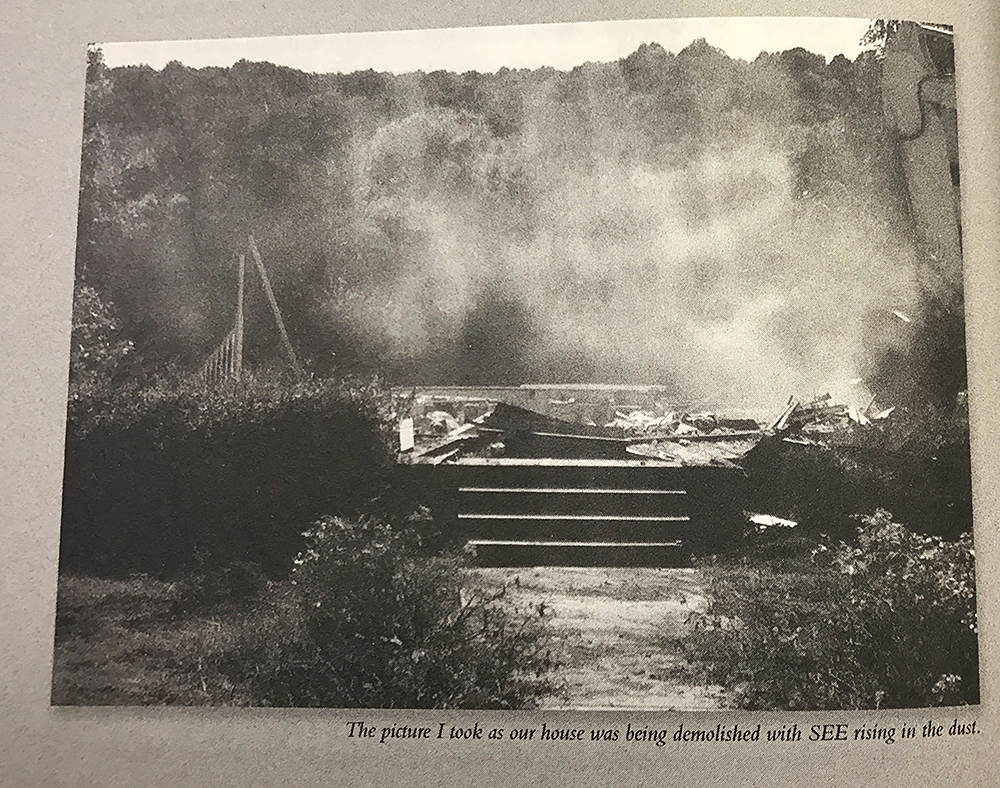 The following is an excerpt from our Founder Steven Curtis Chapman’s book, “Between Heaven & the Real World.” This story takes place after the Chapman’s youngest daughter, Maria, passed away in a tragic accident. They were having their house rebuilt, and Steven snapped a miraculous picture.

Near the end of the demolition, when the wrecking crew was taking a break, with the dust still rising from the devastation, I walked around the house taking pictures using the camera on my phone. By that time, most of the structure had been destroyed except the front steps. I shot some pictures without any elaborate lens or special effects.

I copied the photos onto my computer, and as I prepared to send some of the final photos of the teardown to Mary Beth, suddenly I got chills. One of the photos showed our front steps leading up to where our house had stood. The dust was rising above the ruins, and in the midst of the devastation was a rainbow of colors from the sun shining through. I looked more carefully. What is that? I wondered. I thought I saw the shape of the letter E written in the dust hovering a few feet above the ground. What? I looked again, and on the left side of the E was an S, and on the right side was another E. I gasped. There, clearly discernible in the swirling, rising dust, were the letters forming the word SEE!

I could hardly believe my eyes. As I’ve often teased, I grew up Southern Baptist, so I don’t go around looking for physical signs, but this sure seemed like one to me. I knew I had taken the photo on my phone, with no special effects on the camera. Whatever the camera had seen, that’s why the picture was. But could it really be what I thought it was? Could it really say SEE in the dust? Or was it simply my imagination?

I sent the picture to Mary Beth without any explanation and said, “I’m going to send this to you, and just tell me if you see anything.”

“Yeah, that’s what I see too,” I said, “but I wanted to make sure I wasn’t just imagining things or seeing something that I desperately needed to see.”

Similar to an optical illusion, the word was easy to discern once I saw it. Everyone in the family saw it too and couldn’t believe it. Not only were we amazed to spot the word SEE above the remains of our former home, but the rainbow shining through the dust also seemed like a reminder of God’s new beginnings. To us, it was as though God was speaking like to us. It felt like God was saying, “I’ll write it in a cloud of dust if you need me to, because I’m going to keep reminding you. SEE my hand in this; SEE that I am with you and for you, and I’m bringing beauty out of the ashes in ways you can’t imagine.”

This is an excerpt from Steven Curtis Chapman’s book “Between Heaven & the Real World.”

Posted in Get Involved